Form 8621: Information Return by a Shareholder of a Passive Foreign Investment Company or Qualified Electing Fund

Form 8621 is three-pages and requires the U.S. shareholder to provide the following information:

Specific penalties are not imposed for failure to file Form 8621, unlike the burden of penalties and sanctions imposed by the Foreign Account Tax Compliance Act (“FATCA”). However, regulations coordinate the filing of this form with requirements in the filing of other forms such as the Form 8938 (individual FATCA reporting requirement). U.S. individuals are required to disclose any directly held foreign assets on Form 8938. Exception to this requirement applies to all foreign financial assets the person reports in certain international reporting forms such as Form 8621.

How Flott and Co. PC Helps You

Penalties for failure to file Form 8621 could include a $10,000 penalty (under Form 8938), and suspension of the statute of limitations with respect to the U.S. shareholder’s entire tax return until Form 8621 is filed. This suspension of the statute of limitations provides the IRS with unlimited time to audit the U.S. shareholder’s tax return.

Our company assists you in the process of filing Form 8621, providing you with all the details, resources, and helping you respond to disputes as we represent businesses and individuals in their quest to manage their financial matters with the best tools available. 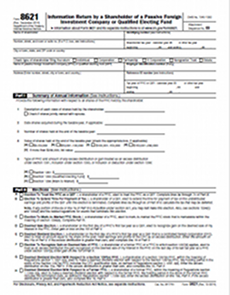 No items
No items
Copyright 2016 Flott & Co. PC. | All Rights Reserved.
This may be considered AN ADVERTISEMENT or Advertising Material under the Rules of Professional Conduct governing lawyers in Virginia.