US Tax Compliance And Planning For US Executives, Entrepreneurs And Investors Living Outside The US

The article was first published in  Global Tax Weekly, issue 170. Below is the full text of the seventh article in the series on US taxes for US persons living outside the US.

US Tax Compliance And Planning For US Executives, Entrepreneurs And Investors Living Outside The US 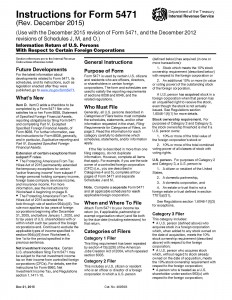 This is the seventh article in a series of articles on key US tax compliance and planning issues that should be considered by US executives, entrepreneurs and investors living outside the United States. This article will discuss the importance of ﬁling Form 5471, the general requirements of Form 5471, and the category of Form 5471 ﬁlers.

Other complications include foreign corporations operating under diﬀerent reporting standards than the US Generally Accepted Accounting Principles (“GAAP”). It is common for foreign corporations to keep their books under the International Financial Reporting Standards (“IFRS”). For Form 5471, the income statement and balance sheet are required to be reported under GAAP and for the currency to be converted to US dollars. If the books of the foreign corporation are kept under IFRS, then in order to convert the information to GAAP, it will require signiﬁcant work and will need to be completed by a professional who understands the diﬀerences between reporting under the IFRS and GAAP. For a US investor in a small closely held foreign corporation, the compliance cost can be signiﬁcant due to the amount of reporting and the skill involved to correctly report the information on Form 5471.

The Foreign Account Tax Compliance Act (“FATCA”)3 increased the potential informational reporting penalties. FATCA increased the accuracy related penalty for understatement of income from 20 percent to 40 percent of the understated amount for foreign ﬁnancial assets that were not disclosed on Form 5471. As important, FATCA indeﬁnitely extends the general three year statute of limitations if certain informational returns, including Form 5471, are not ﬁled.

Since most foreign corporations do not have a US employer identiﬁcation number, the IRS in 2012 started requiring US Persons ﬁling Form 5471 to assign the foreign corporation a Unique Reference Identiﬁcation (“URI”) number. The purpose of the URI number is to make it easier to compare informational returns that span multiple years in order to identify inconsistencies on audit.

US Persons face signiﬁcant diﬃculty in complying with the informational reporting requirements of Form 5471. Remember, there is no income tax associated with Form 5471; it is an additional informational form required to be ﬁled with a US Person’s US income tax return. The required information to be reported on Form 5471 has grown over time and requires extensive ﬁnancial data, which may not be easily obtained by the US Person. 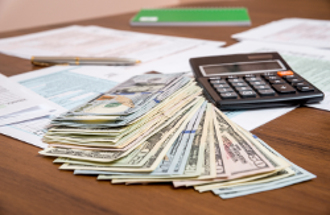 In determining whether a US Person is a Category 2 or 3 Filer, certain indirect and constructive ownership rules apply. US Persons are considered to own shares of stock owned by their spouses, siblings (whether by the whole or half-blood), ancestors, and lineal descendants. Also, stock owned directly or indirectly by or for a foreign corporation or a foreign partnership is treated as owned proportionately by its shareholders or partners. There is no attribution for Category 2 and 3 Filers from non-grantor trusts and estates.

Category 4 Filers are subject to extensive reporting requirements including providing an income statement, balance sheet, statement of current earnings and proﬁts, and accumulated earnings and proﬁts computation. Where a US Person has control of a foreign corporation, the US government is concerned the US Person created the foreign corporation to avoid corporate income tax in the US and/ or to defer income tax to the US Person until proﬁts are repatriated through dividend distributions.

Category 4 Filers are subject to diﬀerent constructive ownership rules than other category ﬁlers. In determining whether a US Person meets the 50 percent Stock Ownership Requirement of a Category 4 Filer, certain indirect and constructive ownership rules apply. US Persons are considered to own stock owned by their spouses, children, grandchildren, and parents.10 Stock considered to be owned by a US Person by reason of a family relationship is attributed only once. In other words, the family relationship does not cause each member’s stock to be attributed to all of the others in sequence.11

There are certain exceptions to ﬁling under Category 4. If more than one US person is required to ﬁle as a Category 4 Filer with respect to the same foreign corporation, the ﬁling requirement may be satisﬁed by one of the US Persons ﬁling the required form.16

US Persons in control of foreign corporations are not required to ﬁle as Category 4 Filers if:

1. They have no direct interest in the foreign corporations,
2. They are within Category 4 solely by reason of constructive ownership from other US Persons and that one of the other US Persons ﬁles a Form 5471 that includes all information required of a Category 4 Filer.17

Also, a Category 4 Filer is not required to ﬁle Form 5471 with respect to a foreign corporation if such person:

1. Has no direct or indirect interest in the foreign corporation; and
2. Would be required to ﬁle as a Category 4 Filer solely because of constructive ownership from a nonresident alien.18

This provides an exemption for US Persons who are attributed control of a foreign corporation solely through family attribution rules from foreign family members and have no direct or indirect ownership interest in the foreign corporation.

For purposes of ﬁling Form 5471, if an entity under the default rules is classiﬁed as a foreign corporation instead elects to be taxed in the US as a partnership, then Form 5471 would not be required to be ﬁled. However, a Form 8865 may be required to report the operations of the foreign partnership. More important than the reporting requirements of a partnership or corporation, is the tax advantages that can be obtained through electing taxation as a partnership instead of a corporation or vice versa. In the initial year a foreign entity is formed it is important that the US Person closely considers whether an election should be made to have the foreign entity classiﬁed diﬀerently than provided under the US default rules.

Determining whether a US Person has a Form 5471 ﬁling obligation is complex. The form itself can be a diﬃcult task, too. Remember, even if an individual has no actual or indirect ownership in a foreign corporation, he or she may be required to ﬁle the form. To add to the potential confusion, there are diﬀerent attribution rules depending upon which category of ﬁler a person is, some of which can require reporting extensive data under GAAP. Because failure to ﬁle a Form 5471 can result in substantial civil and criminal penalties, it is best to obtain advice from professionals who are experienced and knowledgeable. This is not an area for tax rookies.