US Tax Compliance And Planning For US Executives, Entrepreneurs And Investors Living Outside The US – Part 8

The article was first published in Global Tax Weekly, issue 174. Below is the full text of the eighth article in the series on US taxes for US persons living outside the US.

This is the eighth article in a series of articles on key US tax compliance and planning issues that should be considered by US executives, entrepreneurs and investors living outside the United States. This article will discuss controlled foreign corporations, deemed income inclusion, and planning opportunities. 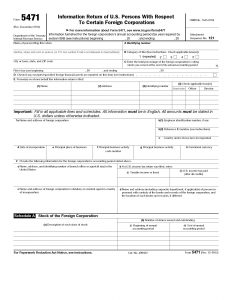 The preceding article of this series (Global Tax Weekly, Issue 170, February 11, 2016) discussed the compliance requirements for IRS Form 5471, specifically with respect to persons who are US shareholders of a Controlled Foreign Corporation (“CFC”). This article addresses CFC and related issues, particularly something called subpart F income.

A foreign corporation is a CFC for a taxable year if more than 50 percent of its stock by vote or value is held by US shareholders at any time during the year.1 If a foreign corporation is a CFC for a period of 30 days or more during a taxable year, then every US shareholder of the CFC at any time during that taxable year and any who own stock in the CFC on the last day of the CFC’s tax- able year must include in gross income his or her share of subpart F income.2 A “US Shareholder” is a US person3 owning at least 10 percent of the voting stock of the CFC.4

US shareholders of foreign corporations are typically not taxed on the earnings of those corporations until they receive distributions, which are usually taxed as dividends, or until they sell their shares. In contrast, for CFC’s there are inclusion rules for certain items of income, which are treated as having been received by the US shareholder even though the CFC does not in fact make any distributions.

To avoid the deemed income inclusion, eleven unrelated US persons could spread ownership to avoid CFC status by each owning an equal interest in the corporation, thus their ownership interest would not meet the minimum 10 percent required to be a US shareholder. This planning could bring other or worse negative tax consequences if the foreign corporation were instead taxed as a passive foreign investment company (“PFIC”). The taxation of PFICs will be discussed in a subsequent article of this series.

The US normally does not tax profits of foreign corporations until they issue dividends to share- holders. If, instead of using a corporation, a US enterprise were to set up a branch (that is, either a partnership or disregarded entity) in a foreign country, the US would tax the US enterprise on the net income generated by the foreign branch.

The goal of allowing US companies to be competitive in the world market through deferral of US tax on income earned through foreign subsidiaries is beneficial; the deferral also creates opportunities for US companies to defer US tax on their foreign earnings. There are countries with no or very low income tax, creating the ability to shift profits to jurisdictions where the US enterprise’s foreign corporations may have few, if any, actual business operations with the result that profits are received in tax favorable countries. This kind of tax planning is usually undertaken for the sole purpose of avoiding US tax.

Say, for example, a US corporation produces widgets in the US for sale in Germany. The sales in Germany are made through a wholly owned German subsidiary corporation. The cost to produce a widget is USD5,000 and each widget sells for USD9,000 in Germany. The US corporation sells the widget to its German subsidiary for USD7,000 and the subsidiary sells it to customers in Germany for USD9,000. Assume the US tax rate is 35 percent and the German tax rate is 25 percent, the sale of the widget would produce an income tax in the US of USD700 (USD2,000 times 35 percent) and an income tax in Germany of USD600 (USD2,000 times 30 percent), for total income tax of USD1,300.

As illustrated in the example above, if there were no anti-deferral or transfer pricing rules, a US corporation could significantly reduce its taxes on sales in another country by routing the sale first through a wholly owned foreign subsidiary in a no or low tax jurisdiction. The IRS certainly has the ability under Internal Revenue Code (“IRC”) Section 482 to reallocate the income among domestic and foreign affiliates in order to clearly reflect income. The purpose of IRC Section 482 is to allow the IRS to reallocate income according to how unrelated parties would transact with each other under the same facts, also known as the arm’s-length standard. Since there are no concrete rules under IRC Section 482 and almost every transaction will be unique in some aspect, reallocations under IRC Section 482 have proven hard to administer. This is a significant reason Congress enacted subpart F, which denies deferral to certain types of so called “tainted” income earned through a foreign corporation.5

Well after the enactment of subpart F, the Joint Committee on Taxation summarized the purpose of subpart F by stating:

The above quoted section shows Congress’ initial motivation in enacting the subpart F rules. Congress was concerned with the ability of US companies to transfer income from the taxing jurisdiction of the US for the sole purpose of avoiding US tax.

In Rodriguez v. Comm’r, 137 T.C. 14 (2011), the Tax Court held that a subpart F inclusion is not a dividend because there is no actual distribution to the US shareholders.10 The Tax Court in their opinion, quoting from a Supreme Court case, states that a “distribution” entails a “change in form of … ownership” of corporate property, “separating what a shareholder owns qua shareholder from what he owns as an individual.”11 The Tax Court reached its conclusion by literally interpreting the rules that apply to subpart F income based on the plain meaning of the statute, and not relying on legislative history for the treatment of subpart F inclusions.

It is important to go through which items constitute subpart F income even though it can seem like a shopping list. A general understanding of what is included in subpart F income will allow a US shareholder to better understand the US tax consequences of investing in a CFC.

The taxable amount of foreign base company income is the gross amount of such income, less any deductions properly allocable to such income, including foreign income taxes.13

Foreign personal company income generally includes (i) dividends, interest, royalties, rents and annuities; (ii) net gains from the disposition of property that produces dividend, interest, rent and royalty income; and (iii) net gains from commodity and foreign currency transactions. There are numerous rules that exempt select categories of income from foreign personal company in- come. One important exception is worth mentioning: dividends, interest, rents and royalties received from a related CFC are exempt from subpart F income, provided the payments are not themselves subpart F income of the related CFC. This exception allows cross-border payments between related CFCs without creating subpart F income in the US shareholders.14

The purpose of this rule is to preclude the use of an intermediary foreign corporation in a jurisdiction where neither the manufacturing nor the property is sold for use. In these circumstances it is more likely the intermediary jurisdiction was chosen to avoid US tax. There is another subset of tests to determine whether a CFC manufactured or produced a good within the country of incorporation.

Foreign base company services income includes compensation, commissions,  fees or other income received for the performance of technical, managerial, engineering, architectural, scientific, skilled, industrial, commercial and like services, where the CFC performs the services for or on behalf of a related person and the services are performed outside the CFC’s country of incorporation. The policy again is that since the services are being performed outside the country of incorporation, the location of the personal services CFC was more likely selected for the purpose of tax avoidance.

This does not include oil related income of a CFC from sources within a foreign country where the oil or gas is extracted or used.

There are four special inclusion and exclusion rules from subpart F income. First, there is a de minimis rule where gross insurance and foreign base company income is not included as subpart F income for the taxable year if the sum of the gross insurance income and gross foreign base company income for the taxable year is less than both USD1m and 5 percent of the CFC’s total gross income for the year. This is an important exception for multinational companies operating in foreign countries where their only subpart F income is passive types of income, as this exclusion would typically preclude interest income from the CFC’s foreign bank account from being deemed income to the US parent corporation. Of course, for a large foreign subsidiary, the interest income could exceed the de minimus exclusion limits.

There is also an elective high-tax rule where a US shareholder of a CFC can elect to exclude from subpart F income any insurance or foreign base company income that is subject to foreign tax at an effective rate exceeding 90 percent of the maximum US tax rate. The reason for this exception is there would be little to no US tax for the US to collect after applying foreign tax credits. US shareholders with common sense would not avoid US tax by sending their investments to a higher tax jurisdiction. Under these circumstances there is clearly a non-tax motive for the US shareholder to invest in the foreign country.

The final category of subpart F income is for the CFC’s investment earnings in US property. The reasoning behind this rule is that a CFC’s investment of earnings in US property can be substantially equivalent to a dividend to its shareholders. Instead of making a dividend distributions to the US shareholder, the CFC could instead loan the amount to the US shareholder. The goal here would be that a loan would not trigger a shareholder level tax as would be the case with a dividend. Under this rule, the amount of the loan will be an income inclusion.

In determining the US taxation of a CFC’s earnings, ordering rules for the type of income deemed to be distributed are important. The distribution from a CFC of current year earnings and profits are deemed to be first distributed from subpart F income, then dividends, and then from the CFC’s investment in US property. The application of these two inclusionary rules are separated by dividend distributions, which makes careful US tax accounting important for the US share- holders of the CFC.

The rule is different for inclusion associated with a CFC’s investment in US property. The inclusion is limited to the sum of the CFC’s current and accumulated earnings and profits. Again, this will require additional tracking of the CFC’s US tax accounting.19 As with the reporting of most foreign source income, the earnings and profits of a CFC are computed in conformance with reporting for US corporations, which will require the CFC to make adjustments to its profit and loss statement for US GAAP and then for US tax accounting.20

The IRC Section 1248 re-characterization can be beneficial for US shareholders that are corporations, as the dividend reclassification on the sale of the CFC stock allows for deemed paid foreign tax credits for income taxes paid by the CFC. The additional deemed paid foreign tax credits can be a significant benefit for corporate US shareholders in reducing their US tax liability.

3        A US person is a US citizen, resident or domestic corporation, partnership, trust or estate.